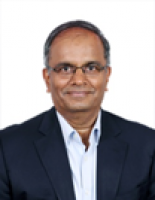 Krishna is a Cost Accountant with diverse experience  of nearly four decades in manufacturing and IT Engineering Sectors.  Starting his career as a Management Trainee in a Public Sector company, gained experience across multiple roles in the finance, accounts, costing and treasury areas. His subsequent career was with a German Multinational where he started as the head of accounts and costing at a manufacturing plant. He then moved to Germany for an assignment in the area of logistics and supply chain. On return to India, he took over as the Plant Manager for manufacturing operations for two factories. He then made a domain switch to HR & IR,  heading the function for the Group in India. He moved as the Executive Director and Board Member, responsible for the Commercial function of an IT Engineering services company of the Multinational.

He was the Chairperson of the  'Indo-German' HR Forum from 2011-2014. He has been a speaker, panelist in multiple events organised by NHRDN, CII, AIMA etc., besides being a guest speaker at many B-Schools in India. He has also received mention as a success story in HR in the book 'Conquering the Chaos' authored by Ravi Venkatesan. He is a Certified Executive Coach.

He is actively engaged in the NGO Sector in the role of Director / Trustee to two NGOs in the areas of education of underprivileged children and care of mentally challenged adults. He is also a start up mentor, assisting and advising start ups in India. He is associated with NSRCEL of IIM-Bangalore. He is a mentor / coach to CEOs / CXOs of companies in India.

A fitness enthusiast, he derives great joy in helping individuals uncover and reach their potential.